How do you house students at a new university? This was the dilemma that faced architects Te Kiefte Architecten when asked to provide temporary student accommodation for a new university that was founded at The Hague in the Netherlands. Eventually the university will build permanent accommodation but for the present it needed studio rooms for 122 students – plus some common facilities – with a planned lifespan of five years.

To the untutored eye it might appear that the accommodation that Te Kiefte Architecten has designed is constructed from shipping containers. But in fact the rooms, while stacked up from prefabricated metal boxes of much the size and shape of shipping containers, were purpose made, allowing them to incorporate reasonable quantities of insulation and for the fittings, including the en suite bathrooms, to be carefully planned, rather than retrofitted. At 7.15m long, and 3.3m wide, they provide a liveable but not over-generous space.

The ends are glazed to almost full height and full width, bringing light into the long thin space and also enabling views over the adjacent lake. Access to the units, which are stacked four blocks high, is from simple raised walkways at the rear. While it would have been practical to create one long block, the architect in fact decided to break up the accommodation into three blocks, not only providing access between them but also reducing the apparent bulk. The two edge blocks are in a warm reddish-brown colour, chosen to echo the taller brick buildings that stand behind them. In contrast, the central block, which is the smallest at only four units wide, is in black.

The cleverest move however comes the painted aluminium cassettes with which the architect has surrounded each window. Meeting at cruciform joints, and rising to a peak, these give some modelling to what otherwise would be an entirely flat facade, allowing a play of light and shadow. In addition they provide at least a modicum of solar shading to the spaces behind. On each block the architect has chosen three accent colours, in addition to the main colour of the block, and arranged them in a randomised but pleasing composition. Appropriately for the native country of Mondrian, there is just a hint of his abstract geometric composition in the arrangement of the colour scheme.

This use of colour does not disguise, and does not attempt to disguise, the fact that the buildings are straightforward assemblies of repeating units, but it also make it clear that the blocks were designed with a care that ensures their temporary nature and strict cost constraints. As much as possible, it has also been done to make the studios energy efficient, with air-to-air heat pumps on the roofs of the buildings providing heating in winter and cooling in summer.

Students who occupy these studios in what is the city’s first university will have decent if unexceptional living conditions, and the knowledge that as much thought as possible has been put into the building that they occupy. Frugality coupled with sensitivity is a good lesson for anyone to learn at the start of their adult lives. 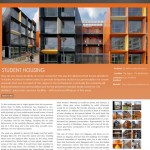 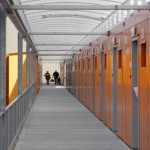 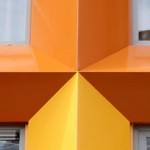 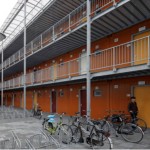 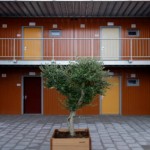 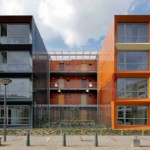 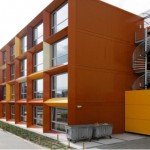 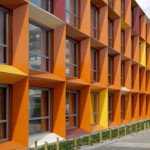 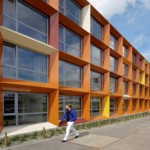 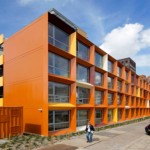 The LME is a 24-hour market with trading taking place through an inter-office telephone market and LMEselect, the LME´s electronic trading platform. The LME is most famous for its open-outcry trading between ring dealing members, which takes place on the market floor.

Ecca´s Objectives: *Setting quality performance standards and developing of test methods *Promoting the benefits of coil and/or sheet coated metal with particular emphasis on environmental, cost and quality benefits. *Stimulating product, process, application and market development *Increasing the awareness of coil and/or sheet-coated metal through professional marketing and by organising educational training programmes for non-users *Creating an industry network and forum for the development and exchange of ideas *Representation of the Industry in its contacts with Public Officials and Public Authorities. *Providing liaison with other Trade Associations and Professional Bodies.